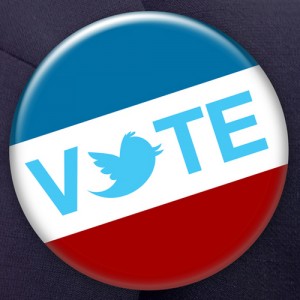 These days, Twitter is the easiest way for political writers, news sites, pundits, prognosticators, and watchers of politics to keep up with a political topic, issue, platform or position.  Through it, they can monitor popular categories streaming on the social media site  from different vantage points, areas, political persuasions, all sharing news, information, links and photos.

Users simply need to log on to Twitter and in the search tab, run a search for a topic that has a pound symbol (#), more popularly called a “hash tag” in front of it and be taken to all those with tweets about that topic, issue, political line.   For those new to Twitter and from the brick and mortar world of business, think of a hashtag as a file in a file cabinet.  If you have a comment or article that you want to share with anyone interested in that file, simply add a tag somewhere on the tweet to file it away.

Because at any given moment, millions of Twitter users are tweeting, the twitter stream can move very fast and so fast that your tweet may get lost in the fray, especially if it is a hot topic. I recall after President Obama announced the Osama killing, I was watching a category of tweets with the word Osama or OsamaisDead in them and it was moving like a tweet per nanosecond.  You couldn’t even read them if you wanted to. Everyone was talking about it and it was a super trending topic. (Trending topic is a term for the top topics people are talking about on Twitter at any given moment.  It changes often throughout the day)

Sharing your political tweets with the world: To revive a tweet you’ve made and tweeted, simply mark it as a favorite before you send it off and re-tweet it later.  You can also use tools available through applications like TweetDeck or HootSuite to schedule the tweet to go out and “tweeted”  later in the day, week, month or year.  Doing so will allow people who are looking at Twitter different hours of the day, including people in parts of the world that are awake when you are in bed, to see  it as well. If you tweet often on a particular topic, you can establish yourself as an expert or leader in the category once you constantly share useful information to others following that stream.

Creating your own Political hashtag: It’s not static either.  If you are organizing an event, have a political organization or cause, you may want to create your own hashtag and encourage participants, event attendees and supporters to use the tag in their tweets when they reference your group.  It is an excellent way to track who is talking about you and what they are saying.

Creating Political Twitter Watch Lists: Also, use the Twitter List function to follow people according to categories: Candidates, State reps, Political analysts, news sites etc.  Twiter has a tutorial to show you how to create lists. Listorious is great application tool for making and following lists as is Conversationalist for automating your lists if you don’t have time to curate them.

You can even make the list private so those on it don’t know you are following them and have them on your watch list.  Each day, you can open that List to scroll what is being discussed or hot among those in the list.

There you have a quintessential guide for the politics news junkie inside you!

Good luck and have fun!