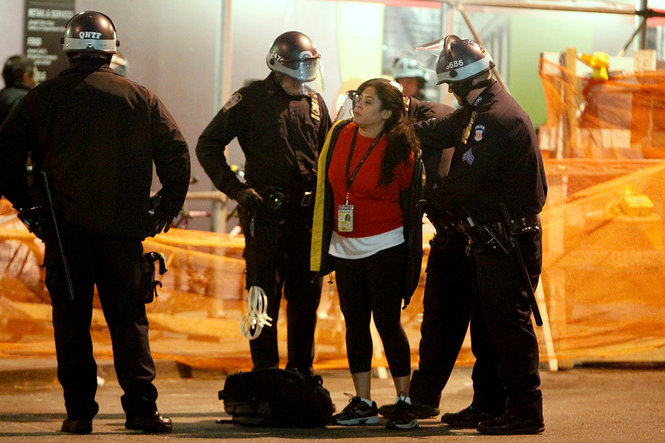 WASHINGTON, DC, February 27, 2012 – In a disturbing national trend, Jacquie Kubin, senior editor and architect of the Communities@ WashingtonTimes.com, became the 64th journalist arrested while covering protests associated with the Occupy Movement. Kubin, 53, was detained after interviewing a protestor at the Conservative Political Action Convention (CPAC) in Washington, DC on February 10, 2012. She will appear in court for her arraignment on Tuesday, February 28, 2012 at 10:00 AM in the Superior Court of the District of Columbia, to answer charges of assault on a police officer and crossing a police line. Kubin denies the charges.

Kubin attended the CPAC convention as a credentialed journalist. According to accounts obtained from witnesses, Kubin was interviewing a protestor when an officer hit her  in her chest. Witnesses later identified him as Lt. Robert Glover.

According to accounts from witnesses and video footage, as Kubin and Rich Stowell, an independent writer at Communities @WashingtonTimes.com attempted to get help for her injuries and make other officers aware of the assault on her by Officer Glover, she was arrested by Glover for assault on a police officer

Kubin, herself sustained injuries to her right shoulder, arm, and chest from the incident.

Her charge of assault on a police officer carries a maximum sentence of 180 days and or $1,000 fine.