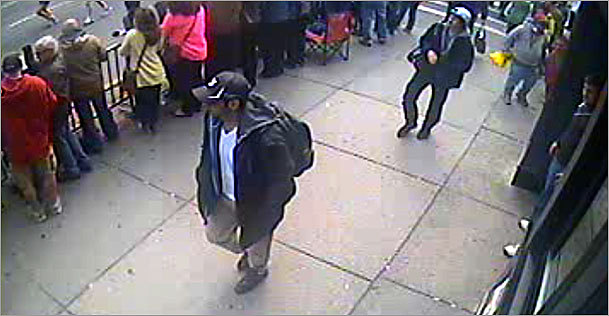 If you are just waking now, you have missed what has probably been what one Twitter user, lawyer Exavier Pope, described as a digital “communal stake out”.

Overnight, one of the two Boston Marathon bombing suspects, confirmed by police to be brothers, was spotted on a convenient store surveillance camera.  Shortly after an officer was found shot to death in his squad car in Watertown near MIT.  Police learned later the suspects carjacked an SUV, discovered the vehicle and got into a shoot out with its occupants during which the two men hurled explosives toward police. One suspect died at Beth Israel-Deaconnes Hospital after attempts to revive him failed

His brother fled on foot.

There is a manhunt on now for him.

President Obama has been briefed on the situation.

Anyone who didn’t care about anything like sleep learned of all of this information, blow-by-blow as it happened via social media, overnight.

But for those just waking, time to catch up.

A recent Facebook –sponsored study indicated that within the first 15 minutes of waking 80 percent of smartphone owners turn to their devices before getting out of bed.

But if you are a resident of Watertown and not on Twitter and following news there, you may have missed the Boston Police tweet ordering all transit down, ordering those on transit to go home and stay home.  You may have not seen the tweet mention of clearing out homes one by one.

You may have missed one user share a photo of SWAT team members on the shed of the home next to hers.

On Reddit, and Twitter the hashtag #BostonPoliceScanner is being used to share information about what the police is hearing and sharing the news online that way.  In fact, the Reddit community is transcribing the scanner word for word.

And come to think of it, is this one of the first times ever, if not the first time local police distributed a video for nationwide consumption to help catch a suspect via YouTube?

Granted there has been a lot of misinformation and mistakes.  One 17-year old High School student got tagged as a bombing suspect in a widely circulated online post which the New York Post picked up and plastered on its front page. He later went to police to clear his name and the paper had to retract.

And yes, there could be some compromise to the investigation if the wanted man is keeping up with police whereabouts online as well with all of this oversharing, we could be helping him plot his escape. So,  there is some danger to this new digital, rapid fire, 24-hour, always on world we are living in.

But considering how swiftly things have gone in the last 96 hours, this could possibly be the first national social media investigation, manhunt, raid, stakeout and hopeful capture in US law enforcement history.

We are in a new era of reporting, news gathering and dissemination.

There’s no turning back now. Time to adjust to the times or get out of the way.