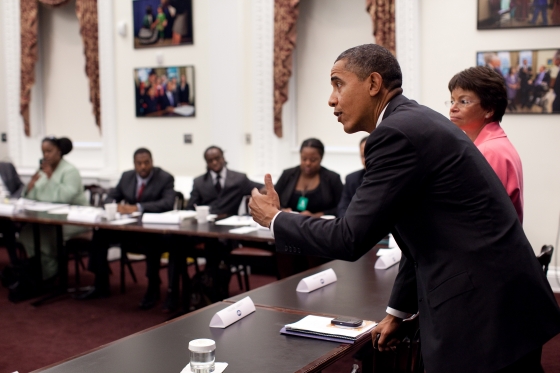 I was one of the 22 Bloggers who attended the White House Summit with African American bloggers this past Monday. I was literally plucked off of the C-list when the founder and CEO of Black Web Media, Angela Benton, couldn’t attend the summit.  One of her 2 picks to go also couldn’t attend the event which took place on Columbus Day, a day when many schoolchildren were home from school.  Lucky for me, my husband works for the Federal government and was able to stay with our children while I sauntered down to the Old Executive Building to hobnob with some of the top Black media journalists and bloggers.

Because I am a news junkie who follows the president’s daily schedule, going into the summit, I had a pretty good inclination that the President might have dropped in our meeting.  He did.  In addition to being an attorney, I also have a journalism degree and history in writing for several local and national publications, so I knew well enough what “off the record” meant.   That is why I was concerned a bit when I peered directly across the conference table and noticed Natasha Eubanks, founder of the Young Black & Fabulous celebrity gossip blog, videotaping  the President’s address to the room with her iPhone.  I assumed she was taping the address to share with her family and friends perhaps, after all that is a proud and amazing moment that anyone would want to capture for prosperity. I didn’t think she would actually publish it. [edited to add: To be honest, I am sure Natasha didn’t mean any harm and perhaps did not anticipate or realize the fall out that could occur and perhaps was unclear about or did not hear the staff explain the rules of engagement at the top of the meeting.]

My initial reaction to the fall-out from Eubank’s release of the video was shame about the breach of protocol.  I was also concerned whether her actions and the media coverage of Leutisha Stills of Jack & Jill Politics blog blunt and honest banter saying that Black Bloggers won’t be “pimped” would’ve damaged relations for the future of Black Media at the White House.  I even ranted about it on my Blog Talk Radio show, Right of Black last night.

This morning, a friend of mine pointed out that I really needed to put aside the  feelings of embarrassment and check out the comments to the NY Times Mediacoder blog post which “broke” the story after it was already broken in the Black Media/Blogsphere.

I was taken aback by all of the ignorance and uninformed opinion on there and had to respond. I did. First, I set off a round of Tweets on my @JenebaSpeaks account.  Then, I decided to sum up those tweets and let them have it on the New York Times site as well.

It still isn’t up. Who knows if it will actually ever appear on the New York Times site in the comments section?

In any event, I thought I’d post it here, with minor additions that could not be submitted due to space limitations:

To those who are saying it would be racist to have a WHITE bloggers summit, I invite you to check out this photo of the liberal bloggers that met with Bill Clinton while he was in office.

While that image marinates in your psyche for a bit….consider this:

Like it or not, America is divided in the way it gets its news.

It is about (dis)trust and credibility. For a very long time, the mainstream media has  had little to no credibility among communities of color.  Many in these communities feel the media cannot be  trusted to accurately and fairly tell the stories of all of America.  We have been talking about this for decades.  It was a major issue when I was in  journalism school in the early 1990s and has been a  topic at many National Association of Black Journalist  conventions.

Tell me do you recall seeing the mainstream media present any humanizing background story of the personal lives of the 17 black men who were victims of the Michigan Serial killer?

TheGrio.com asked the question, however.

How about the coverage of the 11 Black women whose bodies were found in Anthony Sowell, the Cleveland Strangler, home over a decade after those murders occurred?

None of their families was paraded out on the Today Show  talking about the closure they had received knowing that their family member’s murder were finally settled.  Why not? Were their lives and stories not worthy of sharing? Were they not worthy of the sympathy?

The Jenna 6 story was being pushed among Black media for nearly 6 months before the mainstream media picked it up.

Why has virtually no mainstream media outlet reported on the groundbreaking fact that there are nearly 40 Black republicans running for congressional office. That is a story but where is the mainstream media on this?

TheRoot.com got it covered though.

Much of the media got it all wrong as to why DC’s Mayor Fenty lost his bid for reelection. Why were they unwilling to poll real DC residents and see why they came out in droves to vote him out?

The No Wedding No Womb initiative and discourse about Black out-of-wedlock births has been a hot bed issue among Blacks on Twitter and the Blogsphere  for weeks, yet virtually no national outlet has picked up the story.

Have you noticed that the celeb sites like PerezHilton, Entertainment Tonight and E! only cover WHITE celebrities, thus gossip sites like Concrete Loop, YBF and Media Take Out fill that void?

Why must Blacks have to sit around patiently waiting for mainstream media to find their stories, celebrities and interests worthy to be covered? How can anyone honestly question the value, need and purpose of Black media and its credibility, role and value to Black audiences?

The above mentioned media outlets and blogs have been there covering these issues and therefore have the credibility and that is why all of them (sans Jezebel.com), and others,  were invited to the summit.

Does that make Blacks dumb because they are not watching Meet the Press, as commenters to the Drudge report’s story  has suggested?

Have you all even considered that reporters and pundits on Meet the Press and others in the mainstream media  might be failing at  digging deeper on issues as they impact diverse communities?

All of the critics need to get off their high horses, quit with all the condescending finger pointing and learn about the REAL story here!