So apparently, some professional photographers are upset with the latest hottest social media site, Pinterest, which enables users to “pin” their images onto Pinterest digital boards without attribution, credit or a link back to their sites. They are concerned that their photos could be manipulated, copied, shared and possibly used for profit by another person or entity without proper attribution and without compensating them for the work.

The outcry from photographers was enough to scare some people, like one lawyer and amateur photographer, who decided to delete all of her boards when she discovered so many of her photographer friends complaining  about the site.  She wrote about in a widely  circulated blog post that had the effect of raising some alarms, but mainly among people who had never even pinned an item from Pinterest in their lives, don’t really “get” the site and certainly weren’t even active users. It did its job in creating some panic for a spell. Much of it has died down, however.

Some are predicting that Pinterest will become the next Napster. Currently, Pinterest is taking the risky route as its founders have no clue which image owners care about their photos being widely shared and which ones don’t so they will take down any photos if someone complains. Perhaps, a solution may be to have those who care use existing technology to prohibit pinning on their sites.  In fact, I discovered that Pinterest provides a “do not pin” code that site owners can embed in their sites coding to prevent pinning.  Problem solved? Maybe.

Those who see the lucrative future for Pinterest may be licking their chops and wanting a share of whatever future earnings the site has coming to it.  I’ve seen and heard rumblings of intellectual property law firms assembling and gathering photographers and some copyright owners together in preparation to file a class action law suit. (No wonder no one loves us lawyers). *Sigh*

Pinterest as the digital entrepreneurs 21st century“mix tape.” Certainly, I can empathize with photographers, especially those who earn their living through the images. However, I am hopeful that those concerned over copyright violations do not spoil the whole deal for the millions of small businesses who have discovered that Pinterest is their equivalent to a 21st century mix tape.

To those who don’t get the reference, in years long gone rappers, DJs and solo and independent artists would market their music on cassette tapes that they’d sell at bargain basement prices out of the trunks of their cars or give away for free. Their sole purpose was to get as many people to listen to their stuff in hopes that perhaps someone of influence or who has connection passes it off to a radio station music director, record producer or label. It was hard back-breaking work that continues today, and indeed many of today’s successful hip hop artists like Drake, Nicki Minaj, Lil Wayne started out peddling their tapes before they were discovered. 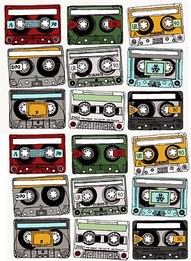 In the digital era, there are thousands, if not millions of websites of all varieties including Etsy sellers, tumblr blogs, and the like all out there doing their best creating content and trying to drive traffic to their sites. Along comes Pinterest and BOOM! For many, they have recognized a noticeable and sharp increase in their blog traffic that they can owe to the rapid rise of Pinterest.

About 4 months ago, I too started to notice some extra traffic on one of my blogs that was coming from Pinterest as pinners were actively pinning a funny image that apparently went viral. After joining and starting to pin images from that site myself, I started getting more requests from advertisers and contact from a variety of PR firms and brands that wanted to connect and partner with that blog. I must assume that much of the additional opportunities stemmed from Pinterest. I’ve garnered more wanted attention to my sites from people discovering its existence through Pinterest.

I did some research and discovered what Pinterest was exactly:

Pinterest Explained- A digital bulletin board: The site is essentially a bulletin board. Think of a mom of a  household going through a stack of magazines on  her kitchen table. In this stac, is a gossip rag like US Weekly, a Running magazine, newspaper, a copy of Vogue, a Do-it-Yourself-Mag, a Real Simple magazine, Reader’s Digest, and  Good Housekeeping. She sees an article she likes and tears it out and various pages, recipes from the different magazines and tacks them on various bulletin boards that line her kitchen walls according to category. So she’ll have a board to hold her recipes; another board for exercise tips; another one for the season’s accessories or outfits she may want to try to put together for a night out etc.

Pinterest is the digital version of that. As web surfers visit their favorite sites, they can pin any image attached to an article onto a board category they have created on their account.  Upon pinning the image, it appears on the general stream that is constantly uploading and updating in real time, similar to how the Twitter timeline does.  Those following a user will also see that image in their stream. If one of a user’s followers sees an image she likes, she can “like” it, comment on it, of repin it onto one of their boards. And that is the viral impact of it all. Pinning is better than other sites in that images pinned link to content that they will want to go back to later when they are looking for a recipe, a quick work out routine, an outfit to put together etc. It has utility beyond the pin. I’ll get into that later in a later post.

How an image on Pinterest can generate sales and revenue: That image has the potential to spread to over a thousand users within 5 minutes of it being pinned. Many of those users will click on the image and be taken to the original site which equals increased page views. For those who have Google ads and other ads services that permit page views to count towards clicks per image, that is Gold!

The other plus about Pinterest is that right now Google recognizes back links from the site. For SEO (Search Engine Optimization) purposes that is excellent as the more people repin an image from your site, the higher it will rise in Google Page rank. A higher rank also translates into more page views and ultimately more revenue for many.

For these reasons, users of Pinterest like myself are discovering dozens of new wonderful sites that they perhaps would not have ordinarily discovered on their own. So the benefits flow both ways from users to site and image owners. Equally, larger established businesses are beginning to use Pinterest to reach existing and new customers.

The benefits are endless, and for that I am hopeful that these few law suits do not doom the entire service. Unlike Napster, where artists and record labels saw their album sales plummet, those who complain of violation could still have had their image compromised via screen capture technology that is free and widely available.  Also, there is no heavily funded Recording Industry of America trade group representing all image copyright holders that would do the weighty job of fighting the site. A class action lawsuit would do that, however.

Those complaining also remind me of those who said the DVR would spell the end to the Movie industry. It did not.

Now it could have implications like how the Apple store changed the music industry.  Granted the Apple store and the ability to purchase a single song off an album has altered indefinitely the music industry forever, there are still struggling artists out there who are grateful that the same Apple store enabled them to reach Apple’s massive database of users and offer their product too. I digress, but in a nutshell, the benefits of added readership to most certainly outweighs the cost of having their image float around the site freely.

Let’s hope this site which is the up and coming website’s digital mixtape stays around longer than some doomsayers predict.

previous post What does "LOL" really mean?
next post The Presidential Innovation Fellowship program, apply this Summer
Back to top
mobile desktop