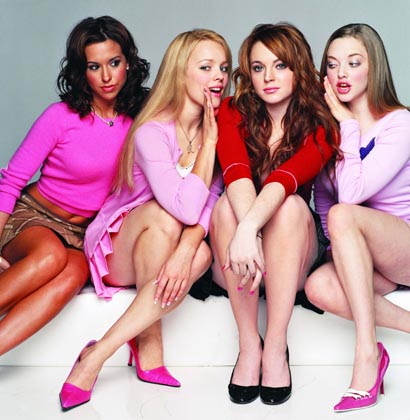 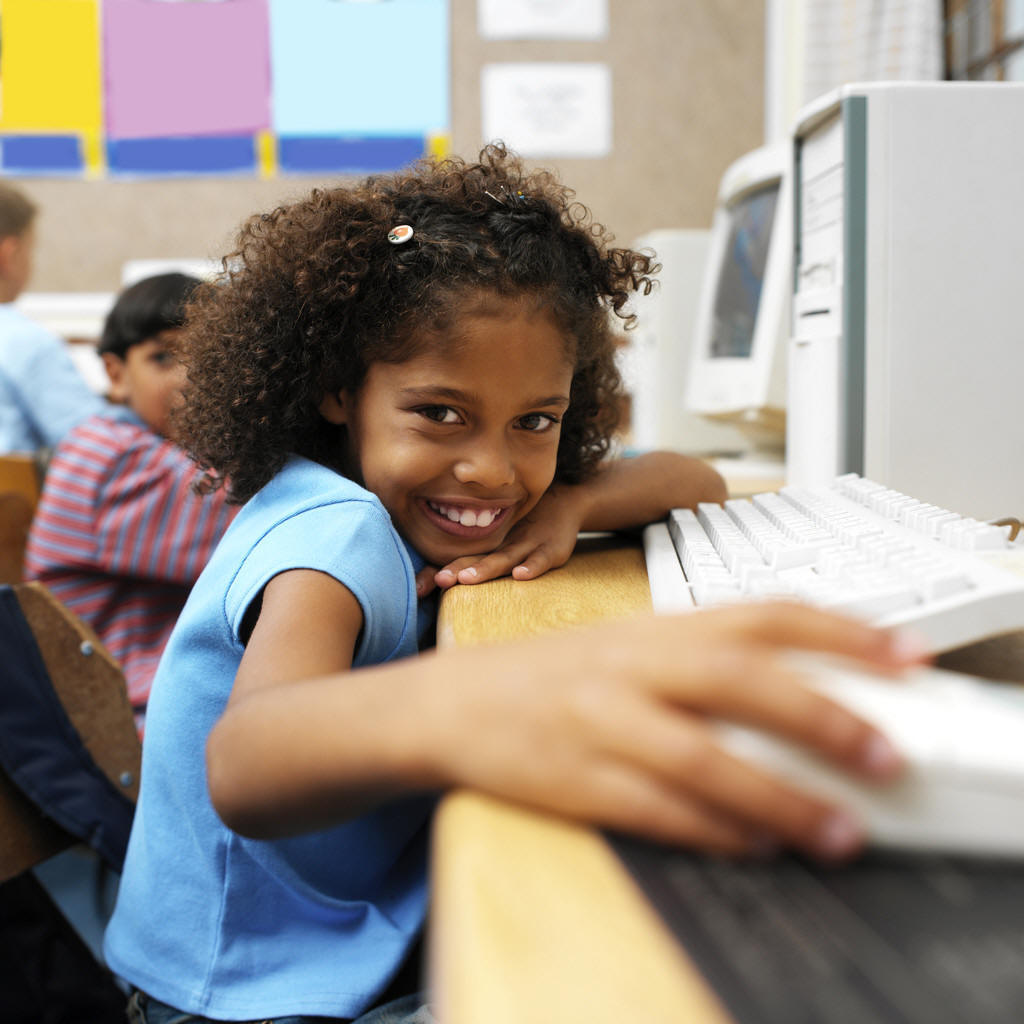 This week, I have been loving seeing photos shared in social media of all of my friends who are top mom bloggers  enjoy their week at Disney World during the Disney Social Mobile Mom Celebration . It’s a public relations week where Disney flies in the most influential mom bloggers down to Disney World in Florida, wines and dines them and introduces them and their families to their new programs, toys and other offerings.

Then two things happened to change my perspective a bit.

Thing one: I asked my daughter this week what she wanted to be when she grew up and she replied, “A Princess”.

I have nothing against Disney or princesses or pink or all things girly girl. Really, I don’t.

But I am well aware that girls, unlike boys, have traditionally been marketed to and to socialize on superficial things like hair, clothes, make up and boys and sometimes to place higher value over their looks than their brains.

This week, while looking for a Facebook cover, searching the term “girls” gave me “Mean Girls” and covers with snarky, sparkly, bitchy, pink, boy- and relationship-focused options. Pulling up a search for “boy Facebook covers” gave me options of single independent boys. Big difference. But I digress. 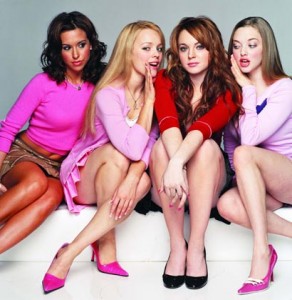 No doubt too much focus on outward appearance is at the core of why many girls have low self-esteem. Girls spend too much time in their lives worrying about and working on their appearance.

Further, the focus on being “pretty as a princess” also plays a part in bullying where girls who are not as attractive as the “pretty cheerleaders” or cannot afford the latest styles may get picked on and called names or made to feel “less than.”

Then there is spill over into academics.

We have those haunting statistics that show girls are behind in high-growth, high income fields of the future like Science, Technology, Engineering and Math (STEM).

When too much emphasis  is placed on being pretty, being rescued, will a girl, have room in her aspiration bank to think she can solve a problem in the world or that she can innovate or create the next best invention?

I am not sure.

And the thing is, my daughter has always been a tomboy. She has two older brothers and is pretty gruff and rough and tumble with them. She has always had dolls but never bothered to play with them, preferring to crash trucks with her brothers. 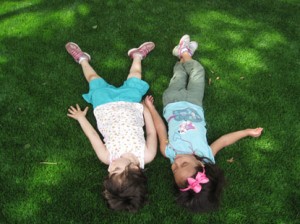 isn’t long enough to be wrapped into a bone straight pony tail. She has always loved the hair God gave her that grows out of her own head.  As a mother who has the same attributes as her daughter, but who only learned to love her natural hair as an adult, I make sure to feed my daughter positive affirmations. After washing her hair, I “ooh and aaah” over how nice and beautiful her tight coils are and she smiles. I think that has helped her be more appreciative of all types of beauty including her own.

But alas, I should have seen it coming.

In her early years of life, we lucked out in that she was usually only one of two girls in her pre-school and nursery school classes.  However, within a week of moving up to a class that had mainly girls, her perspectives changed.  All of a sudden, she wanted to wear more skirts and pink to school. She preferred to play house and with dolls and doll houses. Before then, she was fine kicking a soccer ball or  playing with trucks or puzzles to sharpen her mind.

So the lesson is that no matter how much a parent tries to shield a daughter from gender limitations, it’s pretty hard to avoid what happens when she socializes with other girls.

But it  also works both ways. My niece, for example,  is such a girly girl and from the age of 5 or 6, she always wanted to be told that she was “pretty.” and would ask constantly “Am I pretty?”  When she visited my home, my husband and I noted this obsession with receiving validation of her looks and we made a concerted effort to butt in every time we heard her query and tell her “yes, you are but you are smart too.” We also snatched up and would hide all the Barbies she brought into the house when she visited. (Some are still stashed in a closet somewhere, I’m sure.)

Since then, my niece has been on every single honor roll every single quarter.  We’re not saying it is our influence only, but she needed to hear from someone that what’s in her head matters much and to apply more focus on that.

And when socialization isn’t at play, media is in force.

My girl loves Doc McStuffins, a Disney show about a cocoa-colored girl who plays doctor with all her stuffed animals that come to life when she plays in her room, is one of her favorite shows.  Together,  we also watch PBS’s Sci Girls, a show featuring girls that talks about science and features experiments.

But my daughter’s recent obsession is with Disney’s “Sofia The First“.  It is yet another show about princesses, although I like how this one teaches girls about values, community service, and caring for their fellow humans. So I suppose her recent favorite TV show has to do with her recent Princess Proclamation.

I guess it is time to volunteer with the committee helping Black Girls Code come to DC so by the time my  daughter is 7-years old,  she would be able take the courses that teach girls of color ages 7-16 how to code and build apps.

It’s up to my husband and I to not simply sit back and hope she abandons her princess aspirations. We have to steer and guide.

For every media imposed action, there has got to be a parental unit reaction.

My second *gasp* moment came when while looking at photos my friends at the weekend were sharing, I saw  one wiht the fiercely independent Merida  from the recent award-winning Disney film “Brave” getting coronated into the Disney Princesses Court.

If you know the story, Merida, an extraordinarily brave archer with red curly hair and unique non-traditional exotic looks, shuns all the expectations, saves kingdoms, and remains true to her self, even deciding in the end to not get married and move into a castle.

But  in doing research for this post, I discovered that Disney had also given Merida a make over to be more attractive just in time for her to “fit” in with the other pretty princesses.

Two steps forward. One step back.

It is quite easy to say, “It’s just a Disney character! So what?”

But it’s not that simple as girls do internalize messages about what is “good enough” and it essentially says to be considered a princess, you’ve got to look a certain way. 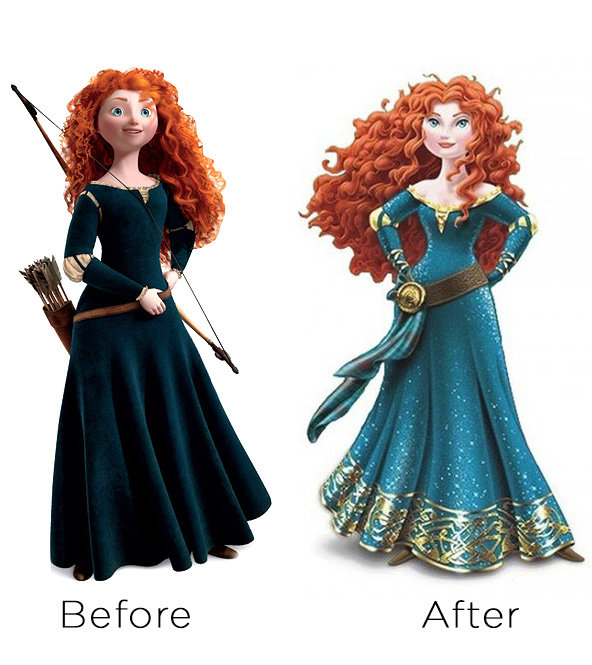 I’ve got my personal experiences with a niece and a daughter to prove that “Princess socialization” can in fact thwart girls’ aspirations to be more than just a pretty face and to be rescued by a Prince. They don’t magically end up that way. There are a lot of factors at play and there’s push and pull even against involved parents who want so much more for their daughters.

It also makes me wonder if  Princess Fiona  from the Shrek animated series was a Disney character and not a Dreamworks Princess would she have gotten an invitation into the Princess Court?

Something tells me, no. Well, not before a make-over anyway.